Boy George & Culture Club have announced a series of exclusive UK outdoor shows as part of the Heritage Live Concert Series for 2022. The multi-million selling group will perform at some of the country’s most stunning venues and will perform at the Englefield Estate, near Reading in Berkshire, on Saturday 23rd July 2022.

Very special guests for the shows will be Lulu, Kim Wilde and Gabrielle - with DJ Fat Tony getting the party started from 4pm!

Since their inception in 1981, Culture Club have sold more than 150 million records worldwide, recognised as a Grammy Award winning UK institution with a stream of classic hits including; ‘Do You Really Want to Hurt Me’, ‘Karma Chameleon’, ‘Church Of The Poison Mind’, ‘Victims’, ‘It’s A Miracle’ and ‘The War Song’ The group are fronted by singer/songwriter Boy George, universally loved as one of music’s most iconic artists who performs alongside original Culture Club members Roy Hay and Mikey Craig. As the first multi-racial band with an openly gay front man, Culture Club set many records and established themselves as icons of British musical history and popular culture.

Since establishing herself as one of the best-selling female singers of the 1960s with her trademark song ‘Shout’, Lulu has cultivated an incredible career in British popular culture. Alongside some unparalleled milestones, Lulu made her film debut in 1967 opposite Sidney Poitier in ‘To Sir, with Love’, and performed the title track which was a No.1 hit in the US. Lulu also was one of four joint winners of the 1968 Eurovision Song Contest with the song ‘Boom Bang-a-Bang’, and later found success with her own self-titled BBC TV show; as well as having a hit with the title theme to the 1974 Bond classic ‘The Man with the Golden Gun’.

Tickets on sale now at heritagelive.net. 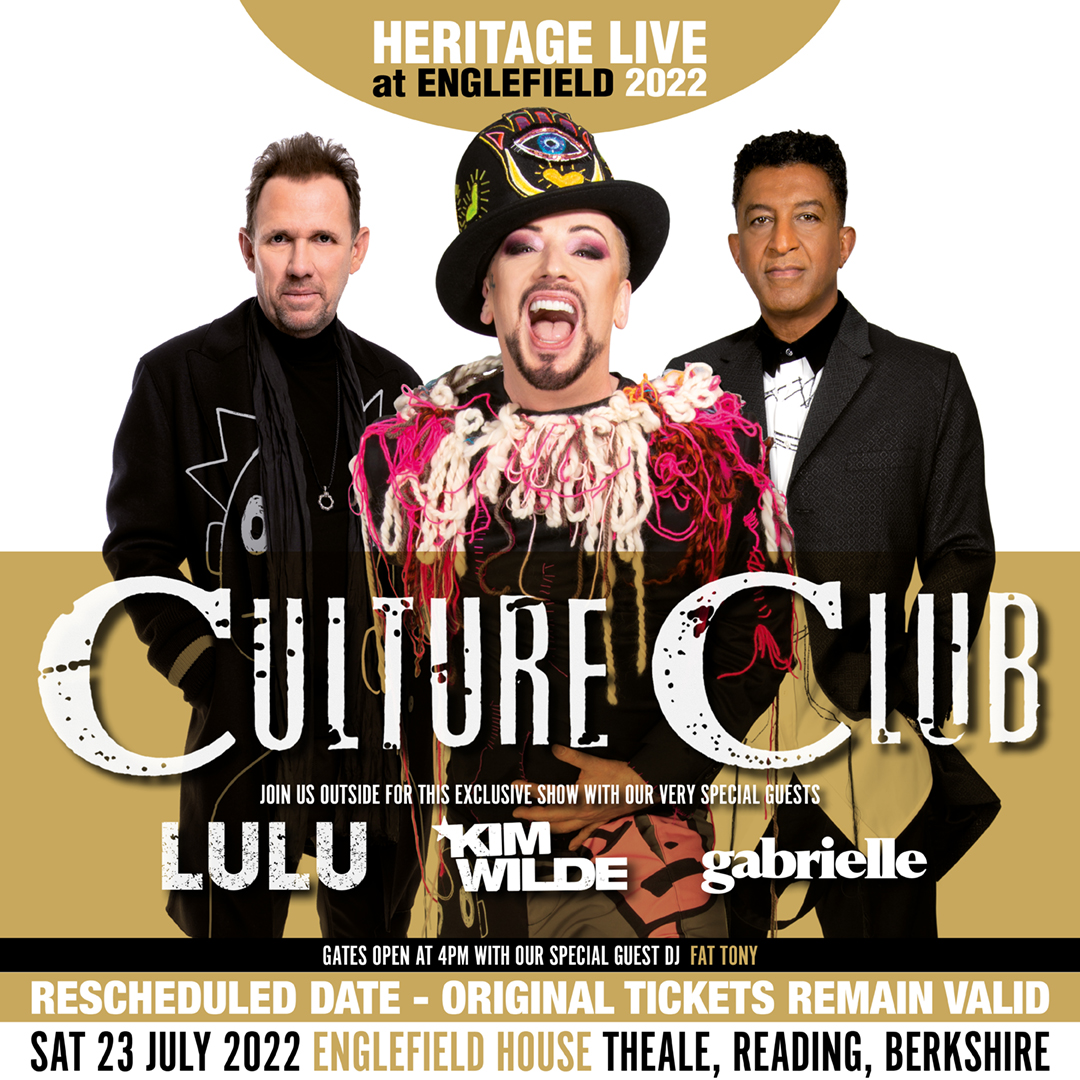 Can I bring food and drink?

Customers are not permitted to bring food or alcohol onto the concert site and please note that any food or beverages must only be purchased from official vendors located within the Englefield concert Arena.

Can I reserve seating?

If you wish to sit/ stand on grass and bring your own camping chair and/or blanket, then please purchase a 'general admission standing' ticket as no chairs are provided for this area, although deck chairs will be available to hire on the night.

Can I bring my own seating?

If you wish to sit/ stand on grass and bring your own camping chair and/or blanket, then please purchase a 'standing ticket' as no chairs are provided for this area. Alternatively, deck chairs will be available to hire for the evening at £7 each.

Yes - Children aged 14 and under may purchase a Child Ticket (proof may be required upon entry). All children under 18 must be accompanied by an adult. Under 5’s free (no ticket required).