The Englefield Estate is working in partnership with the Pang Valley Flood Forum (PVFF) on a pilot project which aims to assess the benefits of using more natural methods to try to reduce flood risk.

A team from the Estate, under the direction of the PVFF, has been constructing so-called “leaky dams” on the River Bourne – a tributary of the River Pang. The dams are designed to “slow the flow” of floodwater, which in turn reduces the risk of overbanking, and the likelihood of flooding further downstream.

The work, funded by Defra, has been undertaken by a team led by the Englefield Estate’s Forestry Manager Richard Edwards, on Estate land south of Pangbourne.

Richard said: “The River Bourne is usually quite peaceful, wandering through the countryside until it reaches the River Pang. But it is in a narrow, deep channel, so in extreme weather the waters can flow very powerfully, potentially contributing to extensive flooding downstream.

“We know that people in Pangbourne were hit badly by flooding some years ago, so when we were approached by the Pang Valley Flood Forum, we were keen to help out.

“The Englefield Estate has been caring for the environment for generations, and we wanted to make sure the work was done in an environmentally friendly way.

“Their grant was awarded to help to increase the research knowledge of using Natural Flood Management (NFM) techniques rather than hard, concrete structures and this really appealed to us. We built leaky dams using locally felled trees which are placed in the river in such a way that the natural base flow of the river isn’t really affected.

“But in times of rising water levels and potential flooding, the dams will hold back the flow and slow it down so it is less destructive downstream.”

Kay Lacey has chaired the Pang Valley Flood Forum since it was set up in 2013. She was previously a parish councillor in Pangbourne and saw first-hand the damage and misery caused by flooding in the village in July 2007.

Kay said: “The Forum is run by volunteers and works closely with the Environment Agency, Thames Water and West Berkshire Council. We have developed a Flood Risk Management Plan which is designed to look at ways of reducing flood risk on behalf of the people living close to the River Pang.

“We are being supported by the Department for Environment Food & Rural Affairs in implementing Natural Flood Management techniques at a number of strategic locations in the Pang Valley, with the aim of reducing the risk of floodwater breaking over the banks of the Pang. Our project will contribute to a national database of information on natural flood management effectiveness.

“I was heavily involved in the recovery work following the 2007 flooding in Pangbourne and know how traumatic it was for local people. We cannot completely eliminate the risk of property flooding, but we believe this work will help to reduce that risk.

“Flooding is not simply caused by heavier than usual rainfall over a few hours or days: other factors such as frozen or baked ground, rising groundwater and unusually persistently wet seasons can all contribute.

“The team from the Englefield Estate have been incredibly helpful and have really bought in to what we are trying to achieve – to protect people and property using methods which work with nature rather than against it.

“The University of Reading are also helping us by installing flow monitoring equipment so we can measure what impact we’re having.”

Richard added: “While work was getting under way it was interesting to see that the Environment Agency nationally was saying that climate change is increasing the threat of floods, and that we can’t win a war against water with ever-higher flood defences. Instead, we should be looking at a range of solutions, one of which is Natural Flood Management – which is exactly what we have been doing here.

“We hope that our work will be seen as a pioneering way of effectively reducing flood risk, protecting people, homes and infrastructure in a sustainable way using natural materials close to hand.”

Find out more about the forestry team at Englefield here. For more details about the Pang Valley Flood Forum, please visit www.floodalleviation.uk. 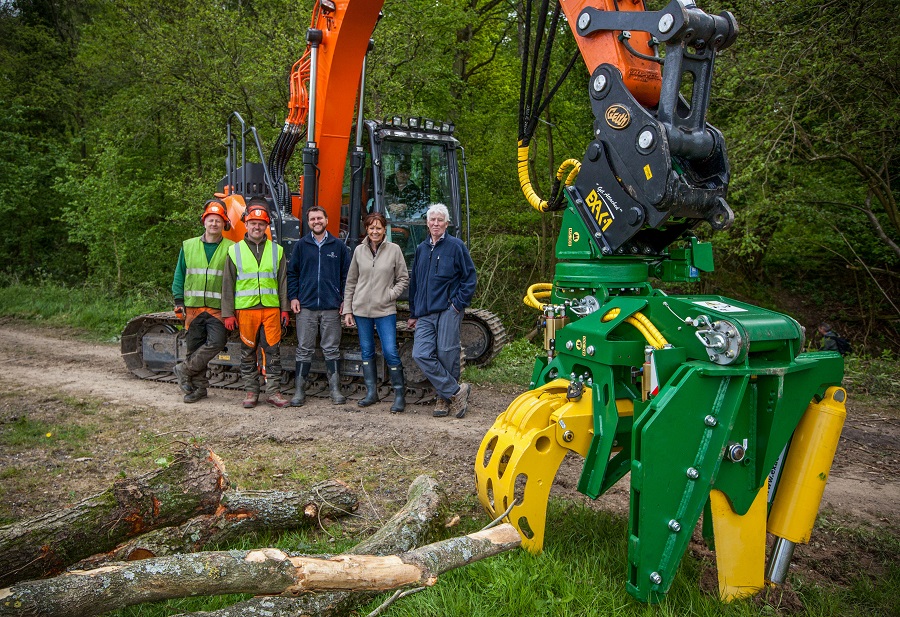 Respect, protect, enjoy. If you're out exploring the countryside this summer, don't forget the Countryside Code. Fo… https://t.co/HCpuSdiBCR

RT @RDGWhatsOn: Well, they did say please... and it sounds like a wonderful event that we'd have been happy to share even if they hadn't!…